Something Different, Just For Fun

I came across an unopened pack of 1991 Pro Set Football cards amongst  my stuff.   Sometimes, it's best to leave unopened packs unopened, but Pro Set was so overproduced, that even unopened material is available for a song. Series I had cards 1-405; Series II had cards 406-850. The pack I found was from Series II.  Pro Set cards did have a lot going for them.  The photography was terrific.

I thought it'd be fun to bust the pack, and show what it contained.  Who knows, maybe I'll pull a Brett Favre rookie, or more to the taste of the Hoard, another Herschel Walker # 576! 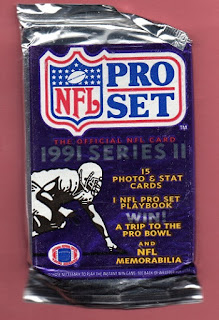 Let's see what the first card I pulled is: 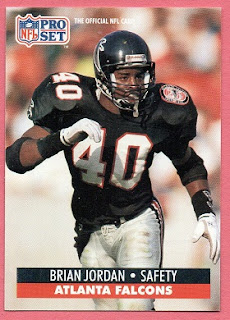 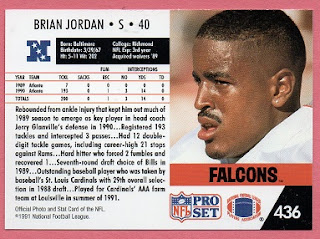 This guy was one of the few who played two professional sports, and was pretty good at it.  He played pro football for the Atlanta Falcons; and played major league baseball for the St. Louis Cardinals, Atlanta Braves, Los Angeles Dodgers and Texas Rangers.

His best year in football was 1991, in which he voted as an alternate to the Pro Bowl. More successful in baseball, his best year came in 1998 with St. Louis. He batted .316, scored 100 runs and hit 25 home runs.  A rash of injuries cut his career short.  Stay tuned for the next card, which will be posted tomorrow.
Posted by Dave Bancroft at 5:42 AM