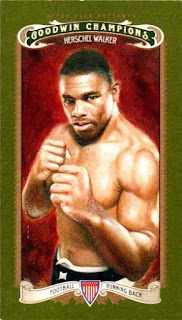 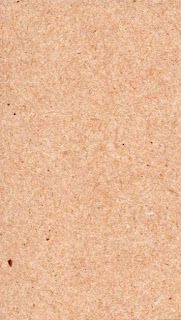 As a rule, I don't include blank backs, in the Hoard, because they are usually classified as error cards, meaning that they are a manufacturing mistake.
However, in this instance, these cards with blank backs were deliberately issued by the manufacturer.
Over a year ago, Dan, a member at the TCDB, informed me of the legitimacy of this subset.  It took me until now to acquire one.
There are 171 different cards in the base set and all subsets. One to one printing plates are also out there.
The base 2012 Goodwin Champions set and all subsets(most are smaller than standard issue, "mini" cards), feature male and female sports stars across all disciplines, from football to billiards.
Herschel Walker is shown here in a fighting pose.  He fought in two Mixed Martial Arts events for Strikeforce, long after he retired from football, winning both matches.
Posted by Dave Bancroft at 4:21 AM No comments: 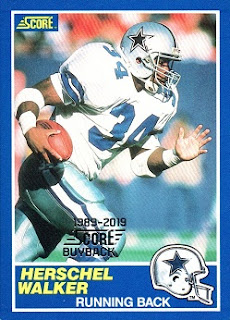 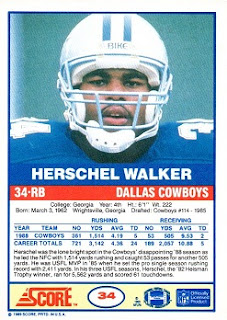 I finally nabbed the third and final Herschel card in the 2019 Score Buybacks series.  I first discovered these cards in June of 2019.  To mark the 30th anniversary of the original issue in 1989, Score bought up some of the original set on the secondary market and reissued them, with the stamp on the card front.