One of the members of the TCDB recently discovered that the 1991 Ultra set had a previously undiscovered variation.  The NFLPA logo, which contains a football, shown on the reverse of the cards, comes in two sizes.  The front of the card is the same in both cases.  Here is the front of Herschel Walker's card: 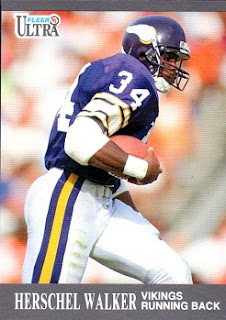 Now here is the reverse with the larger logo, which I recently added to the Hoard: 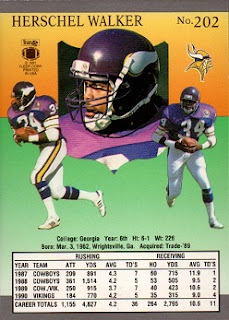 Notice the size of the football in the logo in the upper left.  Now here is the other version, showing the smaller size football: 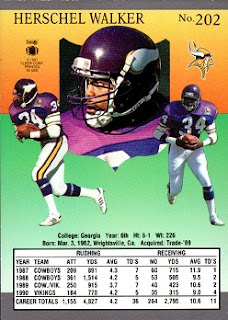 As can be seen, the football in the second example's logo is much smaller.  Though not confirmed, it appears that each card in the 300 card set comes in both sizes.

Posted by Dave Bancroft at 4:01 AM No comments:

Another Top Ten Most Wanted Herschel Walker card is located. 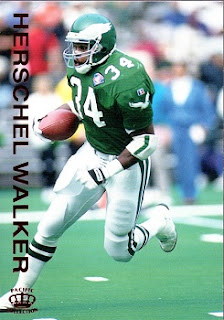 I was really surprised and happy to be able to snag this card, which had been on my top ten, most wanted list for a long time.  This is the Copper version of Herschel Walker's 1995 Pacific Gridiron card, #88.  There are five different color schemes for each card. Blue, red, copper, platinum and gold.   It is a 100 card set and 750 cases of the blue(hobby) edition were printed, along with 750 cases of the red(retail) edition.  The copper and platinum versions represent 10% of the total print run.  I read that there were 20 boxes per case, so 10% of each player, would mean 540 copper and platinum Walker cards were originally available.
In any case, the blue and red versions are already in the Hoard, whereas I've never come across a copper version until now.  I've removed this card from the top ten sidebar list and replaced it with the platinum example, which I hope someday to add to the collection.  The gold version is another story altogether.  There were only 30 total of those made for each player. Who knows?  Maybe someday.
Best of all, I got this card for under a buck.  Some would say, that's all it's worth, but I would say, "See how many pop up for sale at any price."
All in all, a great day at the Herschel Hoard.
Posted by Dave Bancroft at 2:13 PM 4 comments: