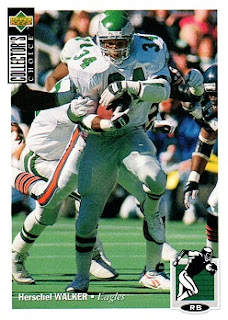 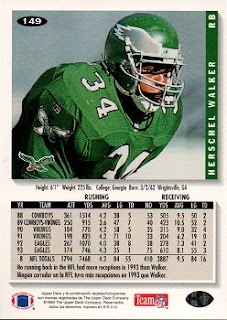 The blurb on the back of this card, "No running back in the NFL had more receptions in 1993 than Walker", which was then translated into Spanish, is the only difference between this 1994 Collector's Choice Spanish card of Herschel's and his regular #149 Collector's Choice issue.
Despite that fact, this is a relatively difficult parallel to locate. In my prior two blog posts, I mentioned how I finally decided to buy an unopened box of the cards when one became available and rip open some packs in order to try and find the elusive card.
I was lucky enough to do so on the second pack and I will put the remaining unopened packs up for sale on EBay.
It's always nice to check off one of the Hoard's top ten most wanted cards and as can be seen, a new candidate, 1997 Stadium Club Pro Bowl #138,  has replaced this one.  Coincidentally, this is the 850th different Herschel Walker card in the Hoard.
Posted by Dave Bancroft at 4:27 AM No comments: 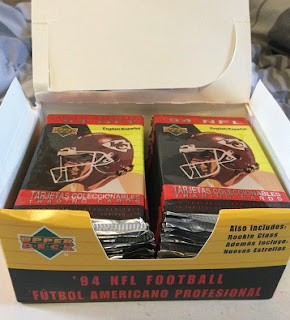 The  box of '94 Collector's Choice Spanish football cards from Upper Deck, which I recently purchased has been opened.

The first pack I opened had a Joe Montana card and a Willie McGinest rookie card.

Then I tore open the second pack and JACKPOT! 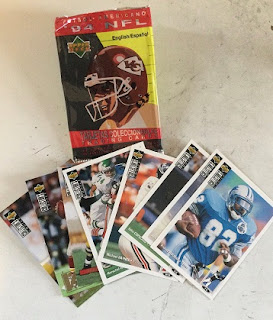 The card I've been hunting for the Hoard was in the middle of the pack.  It's been quite awhile since I could check off a top ten most wanted card for the Herschel Hoard.  The card will be featured in detail tomorrow.
Posted by Dave Bancroft at 4:01 AM No comments:

I decided to spend some of my stimulus money.   One of my top ten most wanted Herschel Walker cards is a 1994 Collector's Choice Spanish #149.  This card is exactly the same as the English base version, except for the fact that the type is in Spanish.

After searching for the individual card with no success, I bid on a box of unopened packs, but was outbid on EBay.   When a second box came up, I put it on my watchlist.  A day or two later, under similar items you have searched for, a box appeared with a buy it now price.

It was about $20 more than what the original box sold for, but I said, "What the heck", and bought it.

Here's what I received: 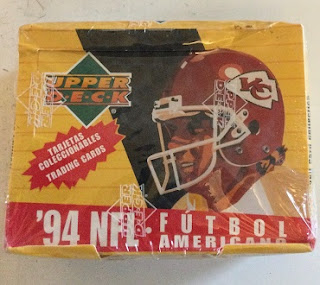 My plan is to crack it open this weekend.  If I am lucky enough to snag Herschel's card right away, I may resell the other unopened packs.

Posted by Dave Bancroft at 4:40 AM No comments: