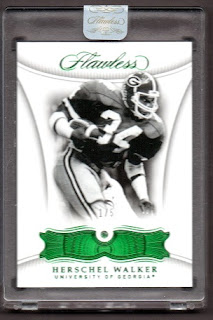 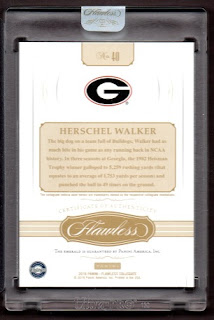 This is the second pickup in this series that I have acquired for the Hoard.  I have the base card in the 2018 Panini Flawless Collegiate set, and now can add the Emerald version.

A Top Ten Herschel Card,(maybe the #1 card) is Found!

A six year quest for one of the most elusive Herschel Walker cards out there has ended today.

The Herschel Hoard is very pleased to welcome in: 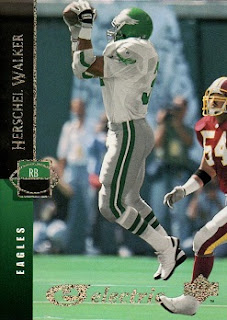 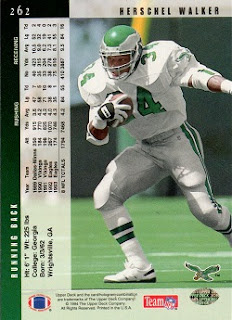 You see that little gold foil electric logo at the bottom of the card front?   That beautiful little logo is something I was beginning to think I would never see.

But lo and behold, a few days ago, as I was perusing EBay for Herschel cards, as I routinely do, there it was.  Someone was selling a '94 Walker Upper Deck Electric Gold card.  I rubbed my eyes in disbelief.

All I had ever come across in the last six years were the base card example, and the Electric Silver parallel, both of which I already had.

After quickly reviewing the seller's offering, I quickly hit Buy it Now, hoping that no one had acted faster.

When the message, "Congratulations on your purchase" popped up, a wave of collecting satisfaction washed over me.

Silly to get that wound up over a piece of cardboard?  Maybe, But thousands of you know just how I feel.

So another rarity replaces this one, and the beautiful journey begins anew.
Posted by Dave Bancroft at 11:45 AM No comments: