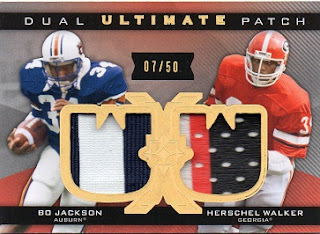 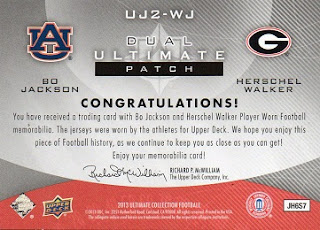 A nice looking memorabilia card of two of the best power and speed guys to ever play college football.  Both Heisman winners to boot.
This is card #596, as I try to get 600 different Herschel Walker cards.  It is serial numbered to 50, with this being #7.
Posted by Dave Bancroft at 4:29 AM No comments:

In 1989, Herschel Walker was part of a campaign to try to keep America's youth off drugs.
That year, two dairy companies, Bridgeman of St. Paul, Minnesota; and Clover Farms, of Reading, Pa. put a message from Herschel on side panels of their milk cartons.

This is the Bridgeman example, which I have in the Hoard: 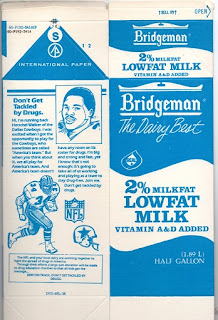 The message reads: "Dont Get Tackled by Drugs."
"Hi, I'm running back Herschel Walker of the Dallas Cowboys. I was excited when I got the opportunity to play for the Cowboys, who are sometimes called "America's team" But when you think about it, we all play for America's team. And America's team doesn't have any room on it's roster for drugs. I'm big and strong and fast, yet I know that's not enough; it's going to take all of us working and playing as a team to stay drug-free. Join me. Don't get tackled by drugs.

The Clover Farms examples are red and green, and there is also a purple side panel example.
The message is the same on all variations.
Posted by Dave Bancroft at 4:38 AM No comments: 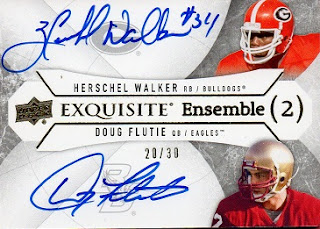 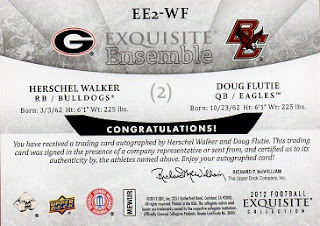 Card # 595 joins the Hoard.  This is a dual autographed card of two Heisman trophy winners. Herschel, of course, and Boston College legend, Doug Flutie. It's from the Exquiste Ensemble set from Upper Deck.
It is serially numbered to 30, with this being the 20th in the series.
Posted by Dave Bancroft at 4:05 AM No comments:

1991 Upper Deck Football, as well as baseball, had some variations as far as the hologram on the reverse of the card.

I recently added two of these variant cards to the Herschel Hoard. 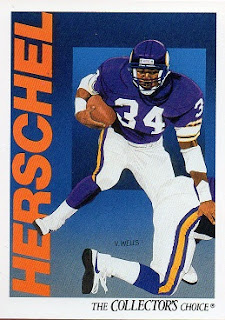 What follows is the most common reverse: 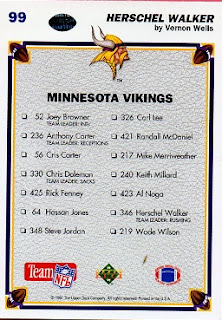 Here is a close up of the hologram: 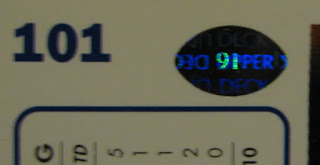 Now here is the reverse of a #99 card with a different hologram; 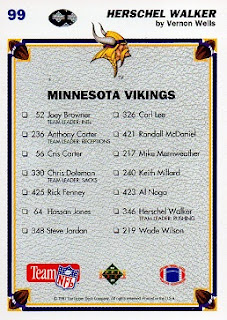 Notice the diamond like design. Though they say 1991,  these cards were actually made in 1992, as there is a small '92 inside the diamond.   These are much harder to find than the first type.  Here's another close up. 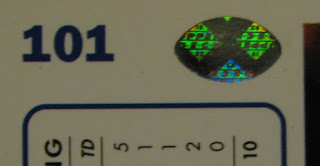 There is also a version which has a 1990 hologram.  I have been unable to locate any of these as yet.  Here is a close up of that hologram: 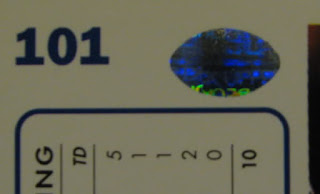 I'll keep my eyes open, and hopefully will come across this example in the future.
Posted by Dave Bancroft at 5:06 AM No comments: 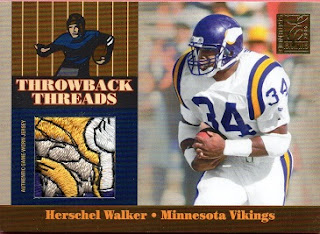 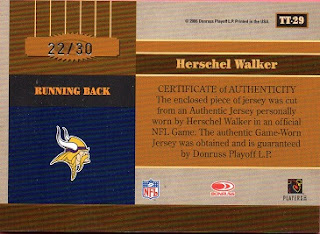 With pleasure, I add another Herschel Walker memorabilia card to the Hoard.  A 2006 Donruss Elite Throwback Threads Prime card makes the grade at #592.

This card was serial numbered to 30, of which this example is 22.
Posted by Dave Bancroft at 4:50 AM No comments: 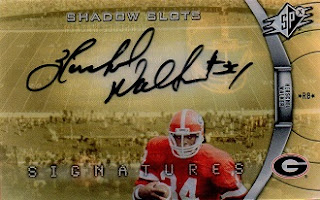 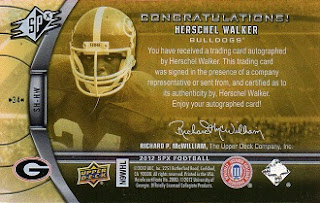 I picked up another nice autographed card of Herschel for the Hoard.  This is a 2012 SPx Shadow Slots autographed card.
There are only 20 cards in the set, so it's a tough find.  Welcome card #591 as I continue towards my goal of 600 different Herschel Walker cards.
Posted by Dave Bancroft at 3:25 AM No comments: 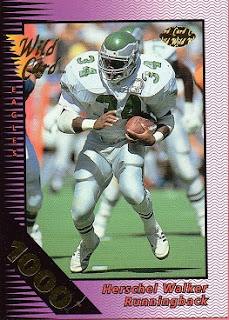 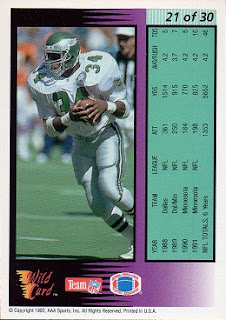 The higher the denomination, the tougher the card was to acquire, or at least, that was the idea. There were subsets of the base set, such as Running Wild, or Stat Smashers, or in this example, Field Force.

It never really caught on, and the company wasn't in business for long.  But now, for a single player collector, these stripe varieties can be very tough to come by.

I was pleased, as I always am, to add a card from Herschel's active playing days, that I didn't own. It fills the bill nicely as card #590 in the Hoard.


Posted by Dave Bancroft at 4:46 AM No comments: