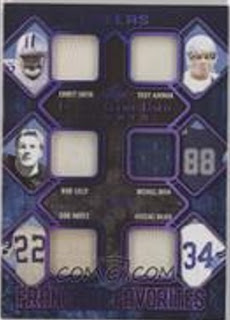 This is another new entry from Leaf, which I'm on the lookout for to add to the Hoard.  This card features 6 Dallas legends:  Emmitt Smith, Troy Aikman, Bob Lilly, Michael Irvin, Bob Hayes and Herschel Walker.

This is the Purple version, shown here and serial numbered to 20.  The serial # is hard to see on this image, but it is in the lower middle, between the names of Hayes and Walker.

There are at least 6 versions of this card in addition to purple.  Gold, silver, magenta, platinum blue, red and a base relics card.
Posted by Dave Bancroft at 3:22 AM No comments:

Email ThisBlogThis!Share to TwitterShare to FacebookShare to Pinterest
Labels: Seek of the week 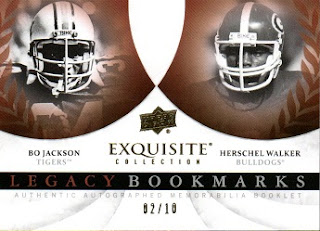 This is a high end card from the 2012 Upper Deck Exquisite Legacy Bookmark line.  The card, or cards really, has four sides and opens up like a little book.

Above is what you'd see as the front cover if it was closed.  As can be seen, it features both Bo Jackson and Herschel on the cover.  You can also see that it's serial numbered to just 10, with this example being #2.

When the card is opened up, both players autographs and jersey swatches are revealed:

Finally, on the back cover, we have this: 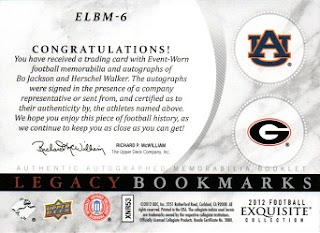 I was always a big fan of Bo as well as Herschel, so I am pleased to be able to add this fancy card of two Heisman winners to the Herschel Hoard.
Posted by Dave Bancroft at 3:45 AM No comments:

I thought I would return to my Seek of the Week feature, which I have discussed before.  This is where I post a photo of a card front, which is not currently in the Hoard, but is on my radar.

The images are courtesy of COMC.  Check out my cards.com.  The featured card this week is: 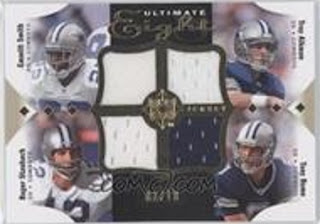 This card image, and most other SOTW images are from COMC's sold out section.  Meaning, the cards aren't available for sale at the present time.  I can only get an image of the card fronts, so I couldn't show Walker, who is on the reverse of this one.

The card is serial numbered to 10.   I hope it someday makes its way into the Hoard.
Posted by Dave Bancroft at 5:04 AM No comments: 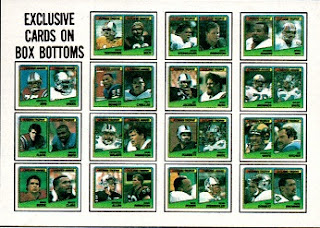 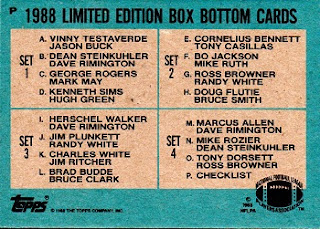 I'm really not big on checklists at the Hoard,  but because this card features a photo of Herschel Walker and Dave Rimington,  I decided to post it.

There were 15 different box bottom cards,  not including the checklist, which featured two players of the era on one card.  Herschel and Nebraska legendary center, Dave Rimington can be seen on the checklist front, in the second row, third card down.

The checklists are not numbered, but are lettered.   The "P" in this example can be seen in the top left corner of the card back.

I have the two player card in the Hoard already,  but I am seeking what is known as a box bottom panels card of Walker.  This was a four card set.  Herschel is shown along with Rimington, Jim Plunkett, Randy White, Charles White, Jim Ritcher, Brad Budde and Bruce Clark.
Posted by Dave Bancroft at 9:40 AM No comments: 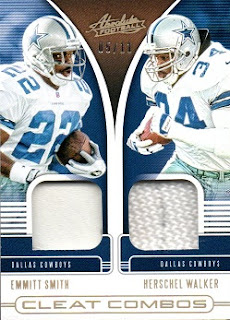 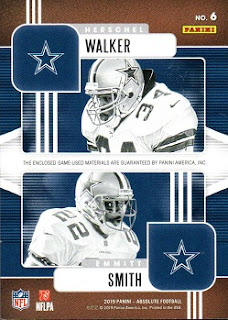 Another issue from the current year makes its way into the Herschel Hoard.  This is a 2019 Panini Absolute Cleat Combos #6 card, featuring Dallas Cowboys greats, Emmitt Smith and Herschel Walker.

The card features a game used swatch of material from each player.  These cards are serial numbered in runs of 49 or less.  This example is from the run of 11 or less, with this card being #5.
Posted by Dave Bancroft at 5:20 AM No comments: