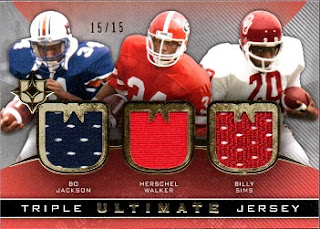 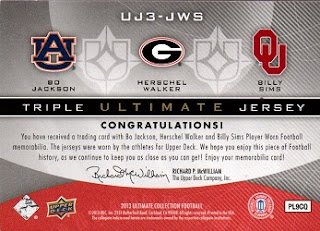 I was able to pick up another card in the 2013 Ultimate Collection.  This card is from the Triple Jersey series.  It features 3 players, all Heisman Trophy winners, with a jersey swatch from each player.

On this card, which is serial numbered 15 out of a possible 15, Herschel Walker is shown with Bo Jackson, from Auburn and Billy Sims, from the University of Oklahoma.

The card #'s, or letters correspond to the order of the player on the card, from left to right.  In this case, JWS is Jackson, Walker and Sims.

Herschel also shares cards with Barry Sanders and Earl Campbell in this set.

Posted by Dave Bancroft at 4:52 AM No comments: 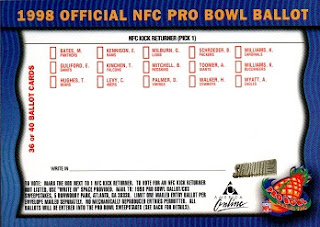 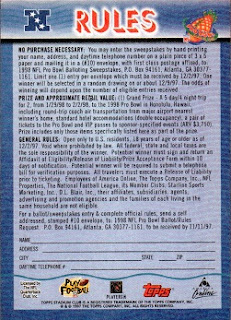 This is an unusual card for the Herschel Hoard, in that it doesn't feature an image of Herschel Walker, but rather, just mentions him.

What this is, is a ballot in trading card form, in which fans could vote for certain players for the 1998 N.F.L. Pro Bowl (from the just completed 1997 season).  It was an insert set in the Stadium Club Football set that year.

Herschel had a good year returning kicks for Dallas, in what would be his final year in the league.

Though he is listed as a nominee, he failed to make the Pro Bowl team.

I  think he actually had a better season returning kicks in 1996, his first year back with the Cowboys.  That season, he returned 27 kicks for 779 yards.  That's an average of  28.9.  His longest return that year was 89 yards.

Posted by Dave Bancroft at 4:14 AM No comments: