Recently, the guys at the Trading Card Database decided to split the 1986 McDonald's card set into two sections.

I'm not sure how I feel about this.  On the one hand, I can see why it was done, as the tab portion has no mention of the particular player, statistics or otherwise.

On the other hand, I've always felt the cards with the tabs attached are more desirable. The cards themselves are not rare by any means, although some colored tabs are harder to find than others.

From what I've heard, this McDonald's promotion kicked off in 1985, featuring the Chicago Bears.  The success of it caused the company to continue the promotion in 1986.  It was called Kickoff Payoff.  The National promotion featured 24 different cards for each of the 28 NFL teams at the time.

In what was a four week promotion, the tabs on each card had scratch off ink, which revealed what food prize could be claimed, based on that week's game results for the two teams shown on a particular tab.

Each week, the tabs were a different color.  Week 1 was blue, week 2 was black, week 3 was gold and week 4 was green.

The '86 Dallas Cowboys set has 25 cards, rather than the standard issue 24.  Specifically, Herschel Walker was the reason for this.  He joined the team in 1986 and was not included in the regular set.

Due to his popularity at the time, McDonald's decided to print a card of Walker for inclusion in the Cowboys set.   The Walker card only comes with a green tab.  There is also no scratch off ink on any of the Herschel cards issued.

Here is the Herschel Walker card from the set, first with tab, then without: 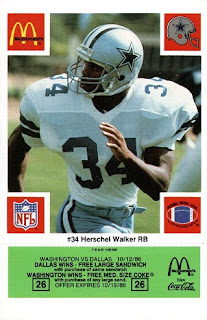 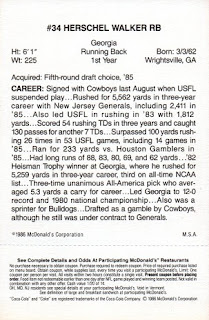 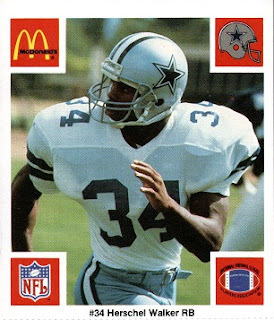 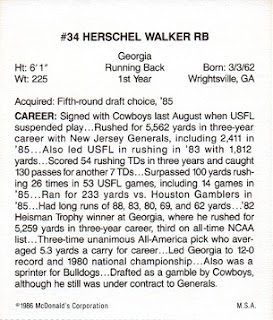 Email ThisBlogThis!Share to TwitterShare to FacebookShare to Pinterest
Labels: 1986 McDonald's 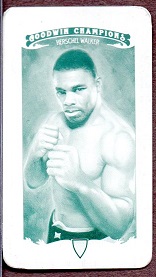 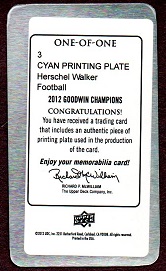 Another printing plate finds its way into the Herschel Hoard.  This is the Cyan plate from the 2012 Upper Deck Goodwin Champions Mini set.

As can be seen on the reverse, this is a one of one item.

The label on the back is off center, but as the first mini printing plate I've come across, I'm happy to have it in the Hoard.
Posted by Dave Bancroft at 4:30 AM No comments: