1988 Topps Superstars Stickers/Sticker Back Herschel's Variations in the Set

There are several variations of each players card in the 1988 Topps Superstars Stickers/Sticker Back set.  This is a confusing set. From what I can garner, the Sticker set is 173 players.  The front of the "Sticker" is just what you'd think, a peel off sticker, while the back is a picture of a different player than is featured on the front.
For example, here is Herschel Walker's "sticker front": 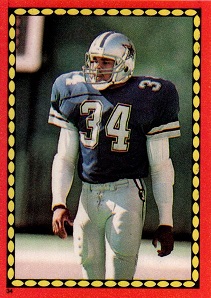 There are several "backs" of this card, depicting a different player. For example, 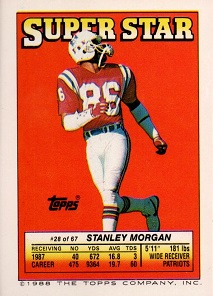 This one, showing Stanley Morgan, and this one: 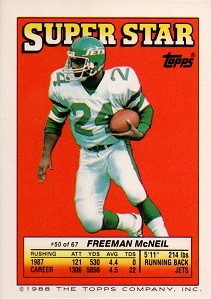 showing Freeman McNeil.   There is also a variation which has Randall Cunningham on the back. There are more I'm sure.

Next we get to the subset of Superstar Sticker Backs cards, which have 67 in the checklist. Herschel has two card #'s in the set, #'s 43 and 44. 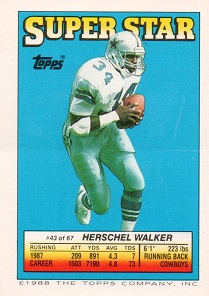 I have no idea exactly how many different backs there are for Herschel's #43 in this set, but I have come across six so far.  I'm guessing there is probably 10 different backs for each player in the set.
Here's what I've got so far: 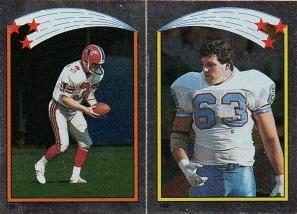 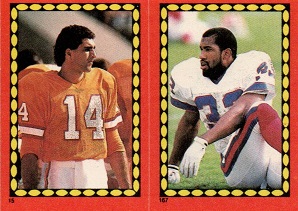 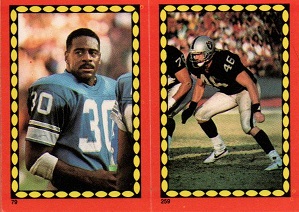 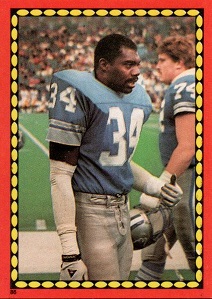 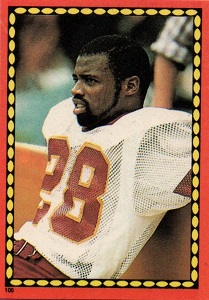 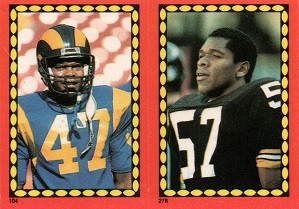 Again, these are just some of  the variations on the other side of Herschel's #43 card in the set.  In a future post, I'll list some of the variations for his #44 card.
Posted by Dave Bancroft at 5:23 AM 3 comments: 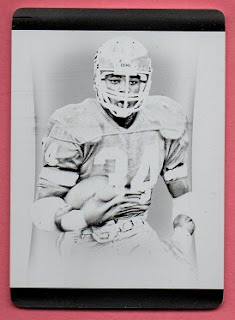 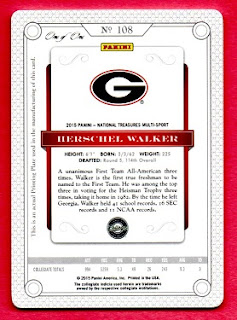 This is the Black Printing Plate from the 2015 Panini National Treasures Multi Sport set. Card #108 of Herschel Walker.  These plates are one of one's, and this is the second such printing plate, along with the magenta, that I've been able to collect from this set.
Posted by Dave Bancroft at 4:48 AM No comments: 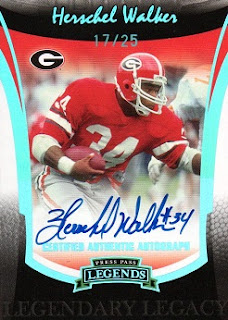 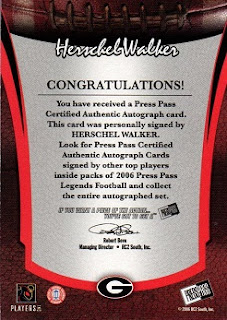 I was able to nab this parallel card from the 2006 Press Pass Legends Legendary Legacy Autographs set.  This is the Platinum card, which is serial numbered to 25.  This card is #17.  The base card, the blue ink and red ink autographs are already in the Hoard.  There is also a 1 of 1, along with printing plates available.
Posted by Dave Bancroft at 4:18 AM No comments: 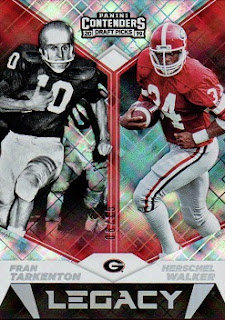 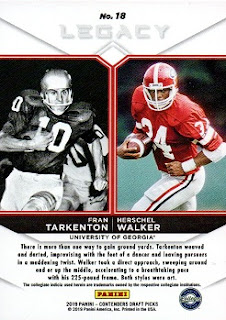 This is the Diamond parallel of the 2019 Panini Contenders Draft Picks Collegiate Legacy #18, featuring Fran Tarkenton and Herschel Walker.  This card is #6 of 15. The serial number can be seen on the front, just above the Georgia logo.
Posted by Dave Bancroft at 4:15 AM No comments: 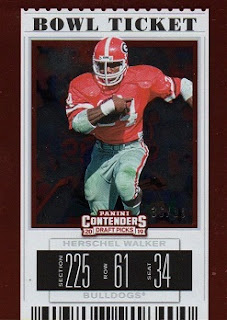 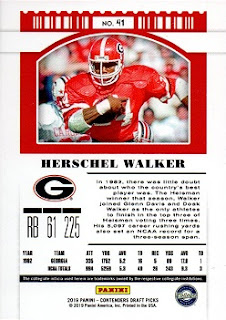 Here is one of Herschel's parallels in the 2019 Collegiate Draft Picks set.  The Season Ticket base card was posted earlier.  The Bowl Ticket cards are serial numbered to 99.  It's really hard to see the numbering on these cards, because it's against a dark background.  The serial numbers are just to the right of where it says Panini Contenders on the card front. This particular card is #36 out of 99.
Posted by Dave Bancroft at 4:34 AM No comments: 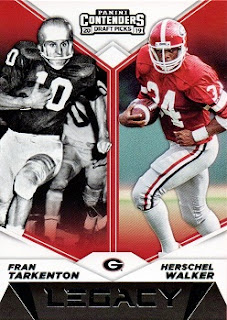 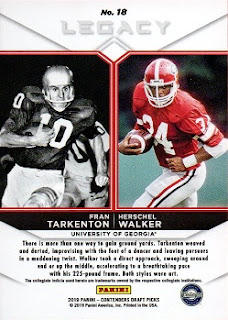 In this subset from the 2019 Panini Contenders Draft Picks Collegiate series, two standout players from the same college are featured. In the case of card #18 above, the players are Fran Tarkenton and Herschel Walker, both from the University of Georgia. 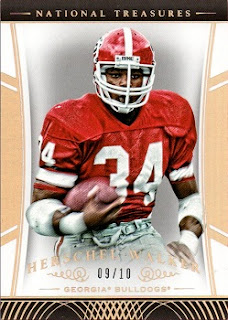 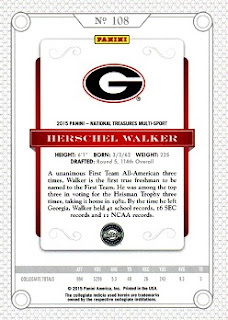 I've been stuck on Herschel cards from 2018-19 for the last several posts, so it was nice to have a parallel card come up from a few years earlier, that was not in the Hoard.

This is the Century Gold #108 card from the 2015 Panini National Treasures Collegiate set.  This card has a serial number run of 10, with this example being # 9.

Already in the Hoard, are several other Herschel Walker cards from this set, including, the base card #'d to 99; Century Silver #'d to 25;  Century Black #'d to 5; and Century Blue, which is a 1 of 1.  I also have one of the four printing plates, the Magenta, which is also a 1 of 1.

Posted by Dave Bancroft at 11:13 AM No comments: 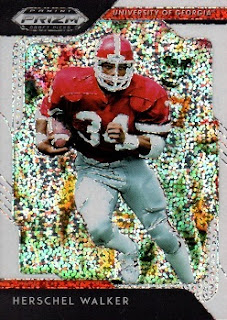 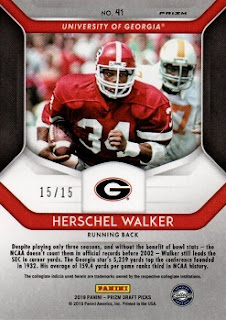 This White Sparkle  parallel is a milestone, as it completes Herschel's run in the 2019 Panini Prizm Collegiate Draft Picks set.  The Hoard is now in possession of the base card and 14 parallels.

The White Sparkle is serial numbered to 15, and this is the 15th and final card.
Posted by Dave Bancroft at 2:36 PM 2 comments: 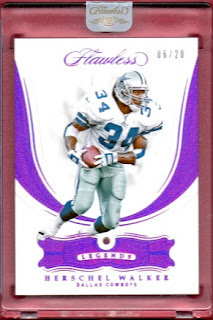 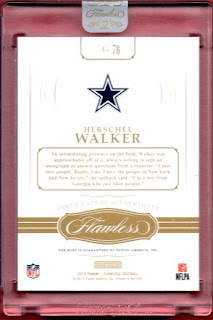 This is Herschel's base card from the 2018 Panini Flawless set.  The base cards are called Gems Ruby. There are 115 cards in the set and all the base cards are serial numbered to 20.  The above example is #6.

These cards come slabbed from the manufacturer, with a tamper proof seal at the top.
Posted by Dave Bancroft at 4:16 AM 2 comments: