My Case Break Auction Experience (Fumble on the Goal Line)

For a guy that likes to collect football cards,  I'm clueless about the sports card market in general.  I just know I like to collect Herschel Walker items, cards especially, and when I see one I don't have, whether it be on EBay, COMC, or a garage sale, I'll grab it if I can.

With that as the back drop, I saw an ad on EBay for a case break of 2018 Panini Immaculate Collegiate Football cards.  The ad featured Herschel's name in the title.  With no experience, and not even knowing exactly what a "case break" was; I dove right in the deep end and bid.

In hindsight, I learned that what I was bidding on was a spot.   The Herschel Walker spot. Foolishly, I had no idea how many cards came in a box, and how many boxes came in a case.  Turns out it was 5 cards per box, with 4 autographed or material cards, and one base set or parallel.  In my mind I was thinking I would have a chance at hundreds, if not thousands of cards, like how the old Topps cases used to be.

How wrong I was.  Panini is a high end set.  I found out from knowledgeable collectors after the fact, that these high end box or case breaks, are more for heavy gamblers than card collectors.

I made another mistake by getting caught up in auction fever, and way overbidding for the spot.  I got a notice from EBay that I had been outbid, and stupidly(boy, I'm really starting to feel like a dope), raised my bid.  Then I got a note that the other guy, whose user name I couldn't see, it was a private auction, had rescinded.   That left me holding the bag, and obligated to pay no matter what.

The break itself was held live on YouTube.  The seller cracked open a case, which held five Panini boxes.  The cards themselves are nice, but really, it's mostly packaging, which makes it look like you're getting more than you are.

When he finally gets to the cards, he shows them, and if any Herschel Walker cards come up, you get them all, for whatever you bid.   If none come up, well, you're screwed.  As you might guess, I came up empty.   The seller did say he would send me "something extra", whatever that is.

It was an expensive lesson learned.  Most guys wouldn't go into this as blindly as I did, might for any who are considering it, you're odds are long.  They also have team spots, like if you bid on say, the  Giants and win that spot, if any Giants cards are pulled, you would win them.  A little better odds, but still a sucker bet in my opinion.

Lastly, I was able to nab a couple cards from the 2018 Immaculate set from a different source. They'll be in the Hoard soon.    Happy Collecting!
Posted by Dave Bancroft at 3:15 AM 4 comments: 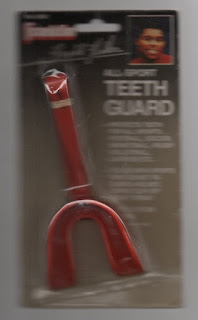 Sorry about the fuzzy scan on this item.   I picked up this tooth guard from Franklin Sporting Goods,  with Herschel's picture and facsimile autograph.

There is also a Walker endorsed kicking tee, which I have,  along with a Franklin football and air pump.
Posted by Dave Bancroft at 3:46 AM No comments:

Things have been slow here at the Hoard, in the sense of finding Herschel cards that I don't already have.  However, there are still items that are around, which I do not have in my collection.

Such was the case with these collectible lapel pins in the shape of Walker's football jersey, which I came across on EBay..   First, is the Georgia Bulldogs version: 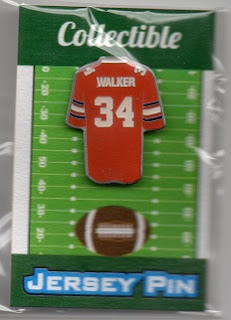 Next, there is a Dallas Cowboys version: 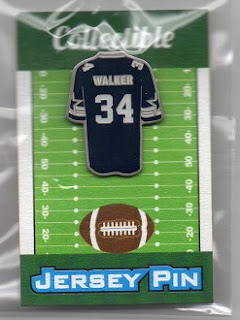 Just a fun, cute item, which I had not seen previously.
Posted by Dave Bancroft at 4:01 AM No comments: