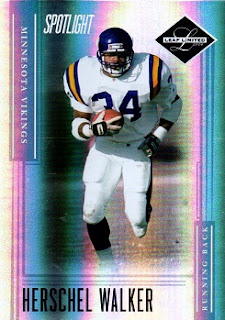 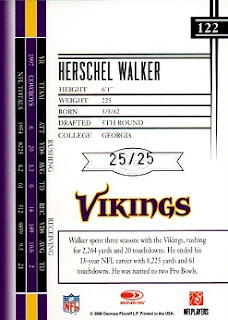 To be honest, when I saw this card pop up on EBay, I wasn't sure if it was already in the Hoard or not.  A quick check revealed that, not only wasn't it in my collection, but it didn't have an image uploaded on TCDB. That made it a no brainer purchase for me.

The serial number is easy to spot on these cards.  It's right in the middle of the card back.  The base card, the Bronze and now the Silver are in the Hoard.  Who knows, maybe someday I can add the Gold, if not the one of one Platinum.

This card is the 861st different Herschel Walker card in the Hoard. 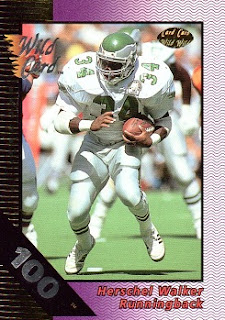 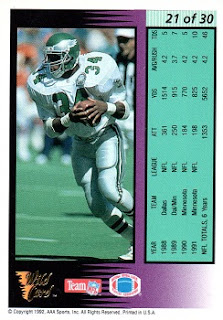 This could easily been a top ten, most wanted card, for the Hoard.  The reason it wasn't is that there are so many of these Wild Card stripe cards that I don't own, there are too many to list under the most wanted sidebar.

For anyone unfamiliar with Wild Card Football cards in 1992, there were two full base sets, with 460 cards in each set. There were several insert sets as well.  In Walker's case, he was shown in three of these insert sets. Running Wild,  Stat Smashers and Field Force.

Furthermore, as in the base set, striped cards were available, in denominations of 5, 10, 20, 50, 100 and 1,000. The higher denominations were supposed to be more difficult to find, however in Walker's case, I haven't always found that to be true, on the secondary market.

The above card is one such example.  It is a 100 stripe, Wild Card Field Force Gold card. There is also a Field Force Silver edition.  The horizontal lines on the left of the card front are gold colored here and obviously silver colored in the Silver set.

I had one of my most interesting bidding experiences for this card since I've been collecting.  On EBay, the same seller offered this card, as well as two 1,000 stripe cards for Walker, in both Field Force Gold and Silver.

I already had a 1,000 stripe Stat Smashers card in the Hoard, so I bid what I though was a pretty high amount on both examples.  Imagine my surprise when I was outbid in minutes! I have been outbid many times at the end of an auction, but never that early in one.  I wanted the cards, but had no intention of going any higher. Someone really wanted these 1,000 stripe cards!

I placed a bid in the $40 range for the card seen here and no one else bid and I got it.  The same guy outbid me on both the other cards, with no one else bidding.  I'm sure he ended up paying more than he wanted, but he ponied up and I hope he enjoys them.

Posted by Dave Bancroft at 5:11 AM No comments: