It's good to get back to Herschel cards after my brief sojourn into a pack break. Today's feature is a 2013 Upper Deck Ultimate Quad Patch card shown below: 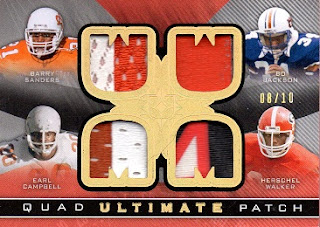 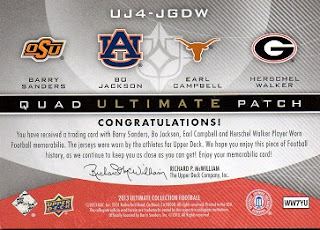 As I've discussed before, the Ultimate Series has a bunch of subsets.  There's Dual Patch and Jersey; Triples Patch and Jersey and Quad Patch and Jersey, along with autographed examples. Different players are also shown, Billy Sims, for example, is on one card, Sanders, the other.

I now have both the jersey and the patch cards in the Quad.
Posted by Dave Bancroft at 4:01 AM