Well, I cracked open my box of 1992 Series 2 Wild Card Football cards.   My aim in buying these two boxes (series 1 and 2), was in the hopes of finding a Herschel Walker card that I needed from this set.

As previously noted, the Wild Card sets contain 6 parallels in both series 1 and 2.  These cards are exactly the same as the base cards, except there are striped "wild cards", which at the time, could be sent in to receive multiples of whatever player you have.

Series 2 differed from series 1, in that, there were also insert cards, including, Class Back Attack, Field Force, Red Hot Rookies, Running Wild, and Stat Smashers.

What I was seeking in Herschel's case, was any of the striped versions in Running Wild or Stat Smashers.  I have the base card of him in each of these insert sets.   I knew it would be a long shot, and it was.  I didn't get any of the cards I needed.  But I didn't pay a lot for the two unopened boxes, and I had fun opening the packs.

I was able to find Walker's series 2 base card.  Unlike his series 1 card, which showed him with Minnesota, this one features him with the Philadelphia Eagles. 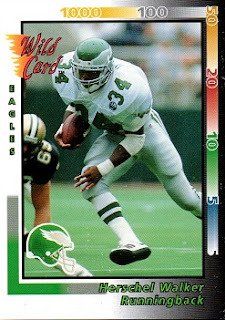 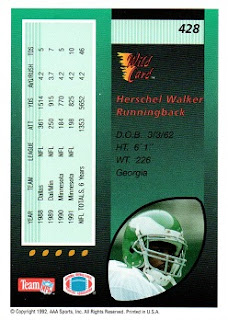 I found a few of the higher striped cards as well.   Here's a 20 card of Jim Everett: 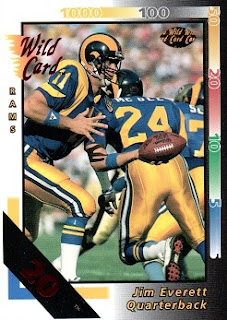 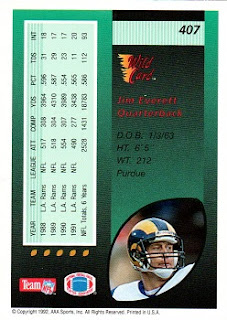 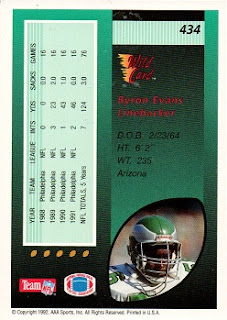 And a 100 stripe of Charles Davenport: 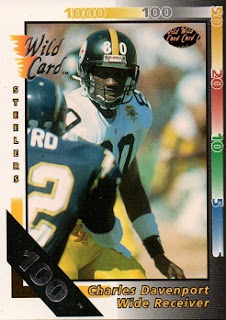 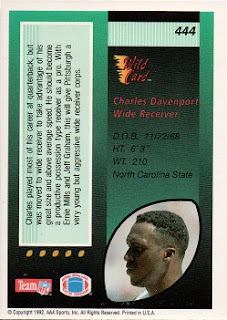 One neat thing is that two of these cards did not have images uploaded to the Trading Card Data Base, so I was glad to be able to add them there.

I'll reveal some of the insert cards I got tomorrow.
Posted by Dave Bancroft at 8:27 AM