Two for one!  2013 Upper Deck Ultimate Triple Jersey and Patch UJ3-JCW and UJ3-SJW 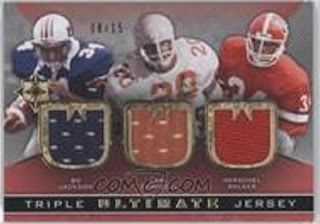 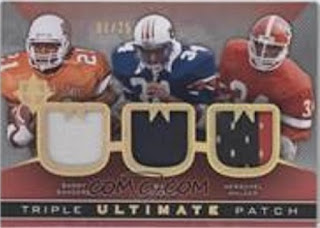 I decided to post two "Seek of the Week" cards today, They are different variations from the same set, namely, the 2013 Upper Deck Ultimate Triple Jersey and Patch set. The Ultimate set has a bunch of different subsets. From the 2013 Ultimate set; I have some single patch and jersey cards of Herschel. I have one dual card, and one quad card, which features 4 different players, but so far, no triples.

Herschel is also on a third "triple" version, along with Bo and Billy Sims.  Thanks to COMC.com, for the use of these images.
Posted by Dave Bancroft at 3:02 AM