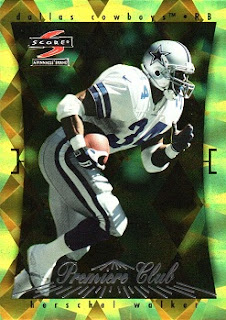 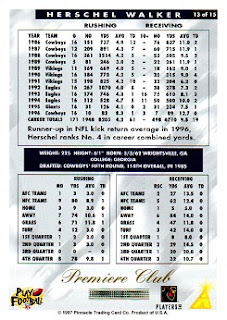 I've been on a lucky run, here at the Herschel Hoard.  In less than two weeks, I've picked up five, brand new Walker cards from a Panini 2022 set.  Then I was able to purchase a One of One, printing plate, from that same set.
Now, I've crossed off another Top Ten Most Wanted card, from my sidebar list.  Above is a 1997 Score Dallas Cowboys #13 Premiere Club card of Herschel, from the 15 card parallel set.  The Cowboys card set had a base set and two parallels.  The Platinum Team edition, which is already in the Hoard and now, the elusive Premiere Club card.  When I say elusive, I mean just that.  I have been searching for this card for over two decades.
It is the first card from the set, which has been uploaded to the TCDB. I searched through some old Beckett Price Guides, but I was unable to find out if Dallas was the only team set produced.
The Premiere Club logo can be seen in script, both on the front and back of the card, near the bottom.
A new card has replaced this one in my wanted list.  That, being a 1995 Collector's Edge 22K Gold Unnumbered #147.
Finding these rare, 1990's parallel cards are what drives me to continue.  Just when you're ready to give up, one appears.  It's like seeing a unicorn!
Posted by Dave Bancroft at 4:37 AM

Thanks Angus. Good to see Dawg Days back up and posting.