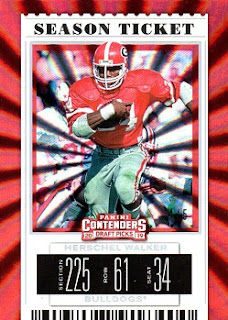 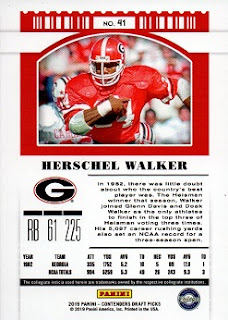 Finding its way into the Hoard is another confusing insert from the 2019 Panini Draft Picks Collegiate set.

This is what is listed in the checklist as the "Fame" ticket.  Bear in mind it says "Season Ticket" at the top, as several of the examples in the set do, and the word fame doesn't appear anywhere on the card.

The sunburst pattern of the front differentiates it from other's in the set, as the Building Blocks or Cracked Ice examples, which were discussed in prior posts.

Many football card collectors resent Panini's onslaught of inserts and parallels, but as I've said, a single player collector goes after as many as he can get.  Within budget of course.

These cards are serial numbered to just 5.  This is #4.  This can be found on the card front, just to the right of where the Panini Contenders Draft Picks logo is.
Posted by Dave Bancroft at 4:27 AM