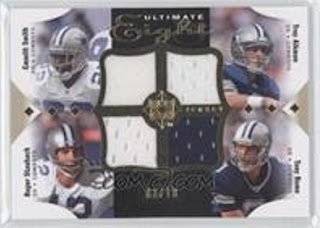 This multi player card contains a jersey swatch of eight players from a particular team's past. In this example; it's the Dallas Cowboys card.  Along with Herschel Walker, who is shown on the reverse side; the card features:  Emmitt Smith, Roger Staubach, Troy Aikman, Tony Romo, Marion Barber, Terrell Owens and Felix Jones.

The card has a jersey swatch from each player. Walker, Jones, Barber and Owens are shown on the reverse side; which, unfortunately, I don't have an image of.  Perhaps someday, this card will find its way into the Herschel Hoard.

The above image is courtesy of COMC.com.
Posted by Dave Bancroft at 4:08 AM