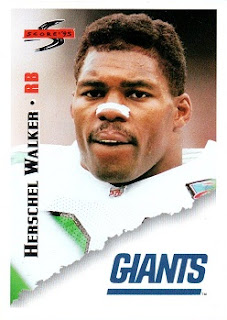 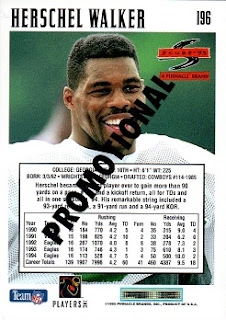 Thanks to Ryan, owner of DanMarinoCards.com; another top ten most wanted card has been added to the Herschel Hoard.  Today, it's the 1995 Score Promotional Backs #196 card.  I didn't know much about these cards at all. They are exactly the same as the base set, save for the word "Promotional" splashed across the back of the card. The total # of cards in the set is also the same as the regular base set.

A member at the Sports Card Forum informed me that these cards were issued in four count cello packs, before the release of the actual 1995 Score set release. I'm not sure if they were released to the general public, or to card industry insiders.  Ryan tipped me off that someone on Sportlots had a few of these for sale and I nabbed one.  I don't think they are particularly rare, you come across them now and again, but some players seem harder to find than others.  This card was already in the TCDB, uploaded by another member.  Despite that, I was not able to locate one until now.

As I've said previously, adding a card to the Hoard from Herschel's playing days, which I have tried to track down for a long time, is always a thrill.  Now that this card can be crossed off the top ten list, I have added a new one.  That will be the 1995 Collectors Edge Excalbur Die Cuts Sword & Stone Diamond #58.

Posted by Dave Bancroft at 4:04 AM