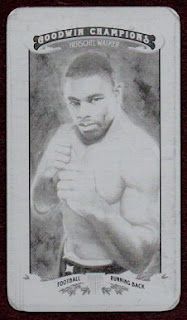 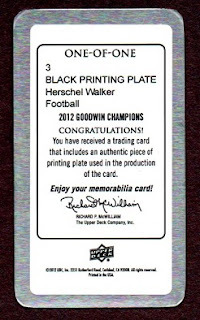 After a long dry spell, I was able to nab yet another one of one printing plate, for the Herschel Hoard.  This is the black plate from the 2012 Upper Deck Goodwin Champions Mini series.  There are four different printing plates in the series and the Hoard now possesses two of them.

It is really becoming difficult to find card examples from Walker's career, which I don't already have.  Now don't get me wrong, they are out there, but the ones I need just don't seem to come up for sale too often.

The bottom line of this is that I will be very lucky to make the milestone of 900 different Herschel Walker cards.  It's possible that I will be able to nab another one of one card, like the one featured above, but the rarity of them makes it very difficult.  The price wanted for some of these cards is prohibitive, at least for me.

Some of the rare parallels from the '90's also almost never show up on the secondary market either.  I will keep plugging away, but don't be surprised if it is a long time between Hoard posts.

Posted by Dave Bancroft at 4:24 AM