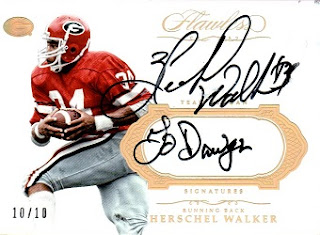 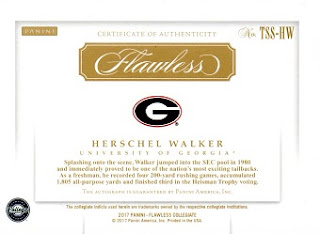 This is, at the same time, one of the nicest looking Herschel Walker autographed cards in the Hoard, along with being one of the most confusing.

Panini Flawless is one of the hardest sets to checklist properly, as there is a multitude of subsets within it.  To make matters worse, although the copyright date on the back of the card reads 2017, the TCDB lists no 2017 cards for Walker in the Panini line.  Instead, this card is listed under the 2018 Panini Flawless Collegiate set, with an added line that it is from the 2017 set.

The Team Slogan part of it comes in where Herschel has added, "Go Dawgs", in addition to his signature.  The autograph is crisp and clear and it's a great photo of Walker in his Georgia red uniform.

Though I have discussed this card before, when I made a post about some of the autographed cards that are in the Hoard, but it was just today that I got the card uploaded to the TCDB. Many thanks for SunDevilCollection for working so hard on these Panini set checklists and creating the space for this great autographed card.

Posted by Dave Bancroft at 1:56 PM

Just found your blog and see you're a fellow Herschel collector. I only go after his cards wearing the UGA gear (GO DAWGS!).

Thanks for stopping by. Best of luck to you with your collection!