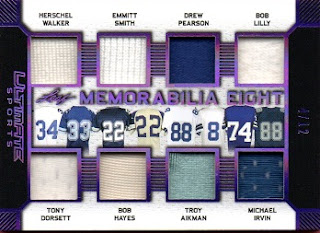 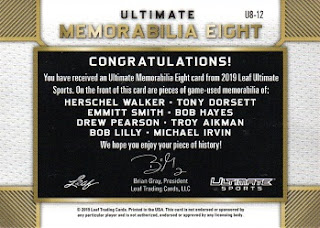 In addition, there is also an Ultimate Sports  Ultimate Patch 4 version.  In that set, Walker is featured with three other Heisman Trophy winners.  However, I doubt I will be seeking out any of those cards.
It's because of my own personal bias, but one of the other former Heisman winners is O.J. Simpson.  I just can't , in good conscience, collect cards of a person that I believe, murdered  two people.
That's not to say that there aren't some people in my collection with off field issues.  Michael Irvin, for example, had some shady behavior, to say the least, but the Simpson thing, especially as a Bills fan, will always stick in my craw.
That said, I do own two Simpson cards.  I'm trying to complete a 1973 Topps football set, and he is featured twice in that set, and I do have those cards.   However, I doubt I would ever spend money on any more Simpson cards.

A quick shout out to the two other Heisman winners who are featured with Herschel.  Earl Campbell and Eddie George.  I admire and respect both those guys.
Posted by Dave Bancroft at 3:27 AM