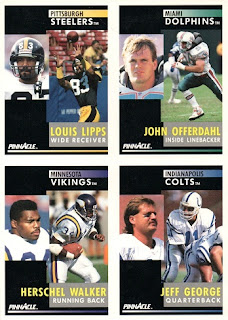 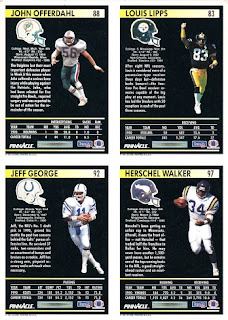 I checked my mailbox yesterday, and was pleased to find one of the cards I have been waiting for.  This is a 1991 Pinnacle Promo Panel featuring four players together as a way to show off the cards in the then upcoming '91 Pinnacle set.

I had no clue about these panel cards.  I've been a member of the TCDB since 2013, and only within the last few months has a new space been created for this item. I'm pleased to be able to fill it.

I went online, and came across a blog from a guy who collects Rod Woodson cards.  There I learned that these 4 card panels were originally introduced and distributed at the Super Bowl XXVI card show,  Jan 20-26, 1992.  The total # of the 5" x 7" panels in the set appears to be 25.

The image on each players card is exactly the same as the base card in the 415 card '92 Pinnacle set.

Herschel shares his panel with John Offerdahl, a great inside linebacker who played his entire career with the Miami Dolphins.  I remember him stuffing Bo Jackson twice in the 1985 Senior Bowl, once at the goal line.
Then there is Louis Lipps, Pittsburgh Steelers wide receiver.   Though not a Steeler fan, I live in Steeler country, and remember what a fan favorite he was.
Former first round draft pick, Jeff George was a bit of a head case, many remember his famous sideline meltdown with June Jones when he was with Atlanta.  But what I remember about the guy, was the was he would drop back, and with an almost effortless, flick of the wrist, throw the ball 60 or 70 yards downfield.

As I've mentioned before, finding a card from Herschel's playing days, which I didn't previously own,  gives me as much pleasure as any aspect of my collecting hobby.
Posted by Dave Bancroft at 3:58 AM

That's pretty cool to discover and get.

After looking at the checklist, it looks like there are two panels with Browns for me to find.

I hope you score them, Angus. I mailed your Nick Chubb card yesterday.