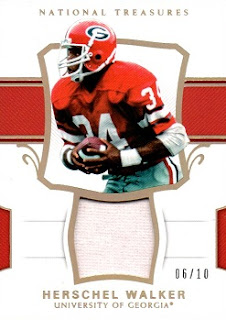 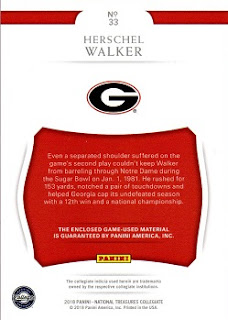 I picked up this parallel from the 2018 Panini National Treasures Collegiate set.   This is the Century Gold card, which is serial numbered to 10, this one being #6.   Also in the Hoard, along with the base card, is the Century Emerald version(#'d to 5) and a Printing Plate(one of one).

I am still lacking the Century Silver(#'d to 49) , the Century Red(#'d to 25) and the Century Black(one of one).  Bear in mind this is only the parallel versions for Walker's card #33.  There is also a card #13 of Herschel in this set.  The front has a different pose, but the available parallels are the same.
Posted by Dave Bancroft at 4:31 AM