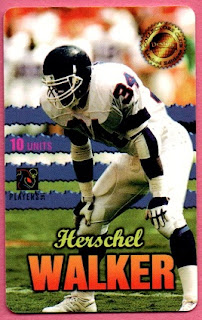 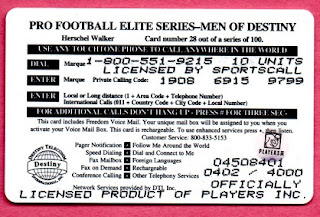 This phone card series from 1997 is a set I was unfamiliar with.  Someone put up an empty space for it on Herschel's page at the Trading Card Data Base, so I began hunting for it.  One popped up on EBay, and I nabbed it.

It was a prepaid phone card set of 100 NFL players, and was licensed by the NFL Players association.  This set has a run of 4000 and there is also a gold set, which has a run of 1,000.

The front image of Walker in a Giants uniform, albeit with a blacked out helmet, is the same one as shown in the 1996 Sportscall phone card.  That card is already in the Hoard and I'm pleased to have this one join it.
Posted by Dave Bancroft at 3:08 AM

Sweet! I like coming across oddballs that I know nothing about. Nice add to your collection.

Thanks Angus. Browns are on the rise.