I recently purchased a factory sealed box of 1992 Wild Card Series 1 football cards from my buddy Don on EBay. (seller id ewinglex). He's a recommended seller, especially for cards of this era.

I got some Herschel Walker Wild Cards from him before, which I have previously posted about.  He had a full box available, so I thought it would be fun to pick it up, and see if I could get lucky and pull a Herschel card that I might not have in the Hoard.

The Wild Card companies gimmick, which I've also previously discussed, never took off, and the company soon went out of business. However, single player and team collectors still hunt them, especially the striped "wild cards".

Most feel the 1,000 stripes are the hardest to locate, but that wasn't the case with me in regard to Herschel Walker.  I found two of his 1,000 cards fairly quickly on the secondary market, but I am missing several of his lower numbered striped cards, especially in the subsets, such as Stat Smashers and Running Wild.

Anyhow, I thought it would be fun to crack a pack a week and see what I find.  So every Monday, I will reveal what I found in that week's pack.

Here is how the box looked before opening: 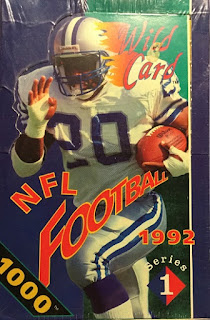 Here is the first single pack I opened: 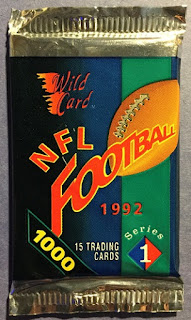 From this pack, I found no striped cards.  Most were common players, with  Darrell Green and Steve Atwater being the most famous players of the base cards, save for one. 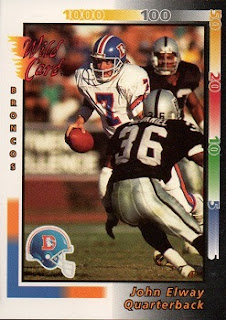 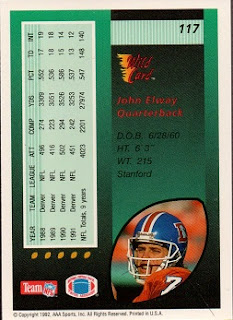