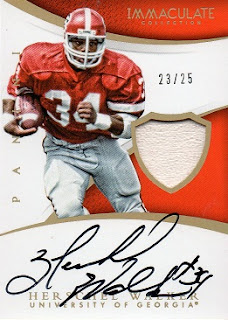 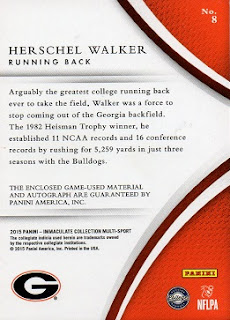 The Trading Card Database lists this as a 2018 Panini Immaculate,  but from the 2017 Update.  Those guys seem to know their stuff, so I'll go with what they say.

I previously posted about a parallel of this card which is already in the Hoard.  It is the same design, also autographed by Herschel, the only difference is the fact that this one is serial numbered to 25, this being #23; and the previous card featured was serial numbered to 49.

Another slight difference is the color of the border around the game used material.  In this instance it's gold and in the previous version it was black.   There is also a 1 of 1 version of this card.
Posted by Dave Bancroft at 11:59 AM