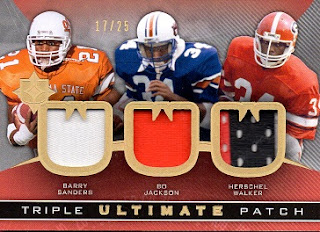 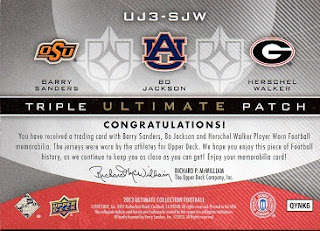 I'm taking a little break from the 2018 Panini sets,(though I have more to add), to feature another card I just picked up.   This is from the 2013 Upper Deck Ultimate Collection.  This memorabilia series features college stars in their respective uniforms.

There are a number of varieties.  Duals, with two players, triples, with three, and quads, with four players shown.  Herschel is on cards with Barry Sanders and Bo Jackson, as shown here; and he is also featured with Earl Campbell and Billy Sims.

This is my fifth card in the set that shows Walker with another player.  This particular issue is serial numbered to 25, with this being #17.
Posted by Dave Bancroft at 3:48 AM