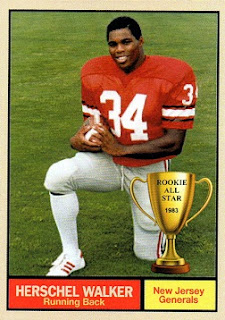 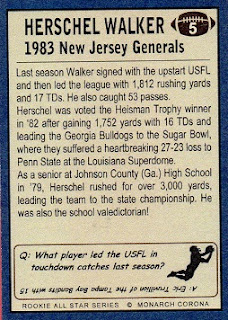 Monarch Corona is an interesting card set.  I was unfamiliar with them, but a google search led me to a great card blog entitled, "Can't Have Too Many Cards".  There I learned that Monarch Corona were lithograph cards, printed in limited edition, by a printer named Jim Miller Jr.

There was a link to the Monarch Corona on the blog, but when I went to the site, sadly it said that no more sports cards were being printed; and that the entire inventory was  sold to a couple of EBay dealers.

One of those, is a fellow named, Jim Milo. His site is called Grouchy Old Man Baseball Cards.
It's from Jim that I purchased the above Herschel Walker card.   I have seen a few other cards from this set; I know there is a Dan Marino #8; a Tony Dorsett #9, a Warren Moon #11, and a Lee Roy Selmon #15.

I had hoped that a checklist might be available, but when I contacted Jim,  he did not have a checklist, nor did he know exactly how many cards were made.  Without a checklist, I can't enter it into the Trading Card Database,  but it's still a nice card to add to the Hoard.

It appears they took the design for the obverse of the card from the 1961 Topps Baseball set.   Here's a Sandy Koufax card for comparison:

The little trophy representing All Star Rookies is a different design, but you can see where the idea may have originated, as shown on the 1965 Topps Dick Allen card, below:

The Koufax and Allen card images are both courtesy of COMC.com
Posted by Dave Bancroft at 8:20 AM