Herschel Walker appeared in 3 Sugar Bowl games during his career at the University of Georgia.  He finished with a record of 1-2,  winning a National Championship against Notre Dame, in his first shot at the big game.

Here is the program from that contest: 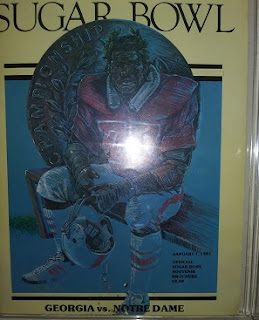 Played at the Louisiana Superdome on January 1st, 1981, the Georgia Bulldogs went into the game as the #1 team in the country, against #7 Notre Dame.
The fighting Irish had a stifling defense, having not allowed a 100 yard rusher all season.  But Georgia had a rusher named Walker that was pretty good.
It was a good thing too, as Georgia quarterback, Buck Belue finished the game 1 for 12 passing for just 7 yards.
The youngest starter on the field that day, Walker rushed for 150 yards on 36 carries, and 2 touchdowns.  The rest of the Bulldog offense finished with a negative 30 yards.
The 17-10 victory gave Georgia their first, and to this date, only National Championship.

The next year, Georgia would take on the Pittsburgh Panthers.  The #2 Bulldogs were upset by the #8 Panthers, 24-20, as Walker was held under 100 yards, gaining just 84 on 25 carries, though he did have two scores.
Pittsburgh relied on the rocket arm of Dan Marino, who threw for 3 touchdowns and  passed for 261 yards.
Not to be forgotten was relatively unheralded running back, Bryan Thomas, who outrushed the Heisman finalist, Walker, by gaining 129 yards on 26 carries.
Here's the program from that game: 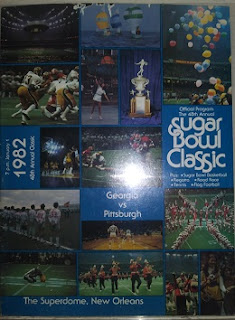 Finally, Herschel would appear in the Sugar Bowl  for the final time on January 1st, 1983, again at the Louisiana Superdome.
Georgia would once again go in as the top team in the nation, with a hungry #2 Penn State team, hoping for their first title.
The Nittany Lions were able to stuff Walker on a crucial two point conversion try late in the game, and held on for a 27-23 win, and the National Championship.
Once again Walker lost the rushing battle to the other team's running back, as Penn State's Curt Warner had 117 yards on 18 carries, while Herschel gained 103 yards on 28 carries.
Curt also had two touchdowns to Walker's one.
This is what that program looked like: 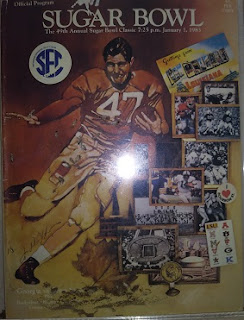 So in the end, Walker's Sugar Bowl appearances were somewhat disappointing, losing 2 of 3, and being out rushed in the last two, but he did almost single handedly win the first one, to capture the top prize in college football.

Posted by Dave Bancroft at 4:56 AM